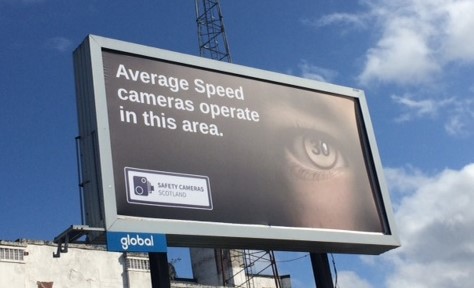 Safety Cameras Scotland are trying to improve driver behaviour on their approach to the average speed cameras on Mill Street, Rutherglen by reminding drivers to keep within the 30mph speed limit.

The billboard, located at Shawfield Stadium, publicise the Average Speed System to those commuting towards Mill Street. The urban camera system enforces a 30mph stretch of road in a built up area, which has saw significant improvement in driver behaviour since the system went live in September 2018. Safety Cameras Scotland are hoping that the billboard will increase visibility in the area and prompt more road users to reduce their speed.

Prior to the cameras being installed, over the 3 year period (2015 – 2018) there had been 9 road collisions which resulted in injury with around two thirds of vehicles speeding on the route every day. Since average speed cameras were deployed there have been no injury collisions recorded on the route and there has been a significant improvement in the level of drivers adhering to the speed limit.

However the number of offences being recorded each month are still high. Safety Cameras Scotland look to achieve results through a dual approach of enforcement and visibility of cameras and signage. The billboard will run for 2 weeks in a bid to raise awareness in the area.

Alan Bowater, Area Safety Camera Manager for the West states ‘Average speed cameras aim to reduce casualties on Scotland's roads by providing a visible and effective deterrent. We know these cameras are effective at doing so because we have seen huge improvements on the existing stretches of road that these cameras cover. If this campaign can help reduce the number of drivers speeding on this stretch of road then it will have been a success.’

Chair of South Lanarkshire Council’s Roads Safety Forum, Councillor Julia Marrs, said “Highlighting the use of safety cameras in this area is a positive move and one which we welcome. There is no doubt that the use of safety cameras – and in particular average speed cameras – can help significantly reduce the number of accidents on our roads. However, the message is clear for every road user – slow down and observe the speed limit at all times.”